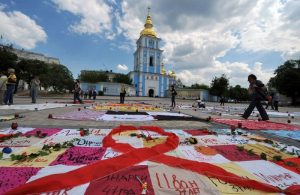 Ukraine had the highest HIV infection rate in Europe after Russia in 2017, according to a report published by the United Nations World Health Organization’s European office on Nov. 28.

Moreover, infection rates in Ukraine have been on the rise since 2015. Every year around 3,000 Ukrainians die from AIDS.

Among the regions with the highest HIV infection rates in Ukraine are the Russian-occupied regions of the Donbas and Crimea.