A key convention was ratified after eight years, but political will and finances are thwarting implementation 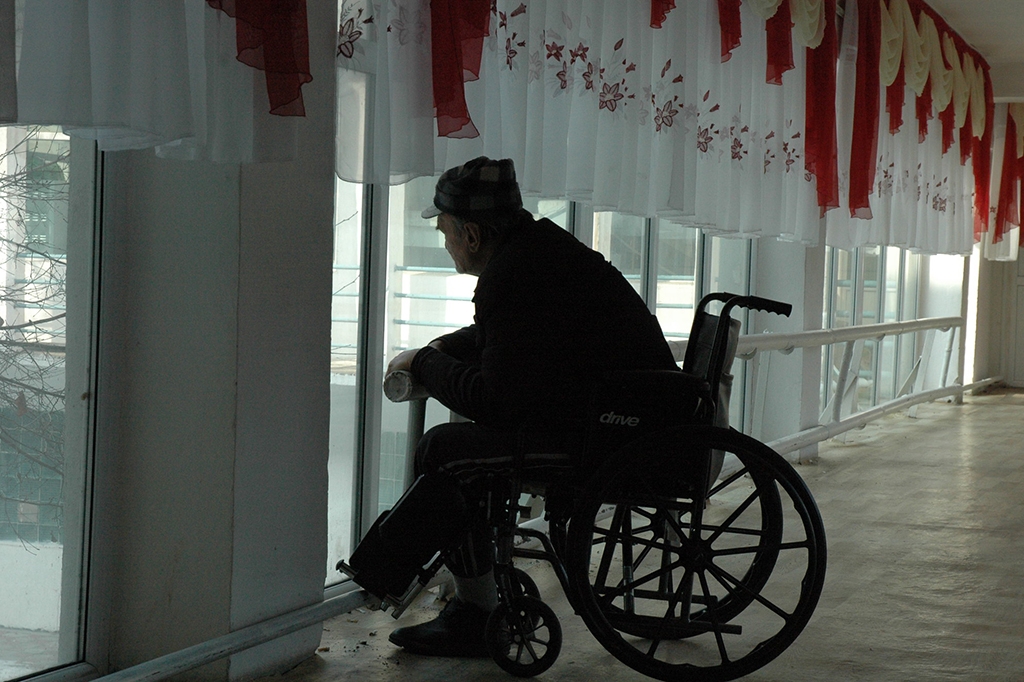 Ziyagul Ismailova is well placed to judge the progress Kyrgyzstan has made expanding rights and services to its disabled citizens since independence.

She was just 10 years old in 1991 when she suffered a horse-riding accident that damaged her spine. Attempts to treat her injuries failed, partly due to an incorrect diagnosis.

Ismailova went from crutches to a wheelchair. By the sixth grade she had left her school in the southern region of Osh, which was not fitted to serve the needs of a disabled person.

As time went on, she lost control over the lower half of her body.

Now an Asian arm-wrestling silver medalist with ambitions of becoming a psychologist, Ismailova identifies most as an activist – a calling that sees her attend trainings with her daughter, five-year-old Tattuu.

“It’s so important for me. In our society, being the daughter of a disabled person is not easy. Children are cruel,” Ismailova told Eurasianet. “I want her to know her rights, and to be able to defend them from the classroom bench.”

Kyrgyzstan became a signatory to the 2006 Convention on the Rights of Persons with Disabilities (CRPD) in 2011.

The United Nations describes the CRPD as taking “to a new height the movement […] of viewing persons with disabilities as subjects with rights, who are capable of claiming those rights and making decisions for their lives based on their free and informed consent as well as being active members of society.”

Ratification took eight long years. In 2017, then-prime minister Sapar Isakov explained the reason for the delay: There was not enough money to fulfill the convention’s demands. Parliament finally approved the bill in 2019 with then-president Sooronbai Jeenbekov signing it into law.

Two years on from ratification, Kyrgyzstan is required to submit a progress report to the United Nations. But a key action plan that would require investments into re-equipping buildings, new rehabilitation services for disabled people and medical services including prenatal and neonatal screening, has still not been signed by the government.

The delay, once more, appears linked to budgetary concerns even though donors such as the United Nations Development Program and the Organization for Security and Cooperation in Europe, who are already supporting the government’s bid to realign laws and policies with CPRD, will provide co-financing.

There are over 196,000 people registered with disabilities in Kyrgyzstan.

On the ground, the pace of change is glacial. In employment and education disabled persons still face barriers and discrimination. Most buildings in the capital Bishkek lack ramps, accessible toilets and other infrastructure, with provincial cities far worse off.

Disability activists say that making buildings like state hospitals and citizen service centers (known by the Russian acronym TSON) accessible would be a good start.

But it is often in these government institutions that disabled citizens face the biggest indifference.

Ismailova, for instance, was forced to pay to deliver her daughter privately, because a state hospital refused to accept her as a patient.

“They told me that they could not take responsibility for me and accept liability for me, because of my condition,” Ismailova said.

Ukei Murataliyeva, head of Nazik Kyz, a non-profit focusing on rights for the disabled, told Eurasianet that such rejections were routine.

Gulmira Kazakunova, director of the Ravenstvo (Equality) non-profit, expressed despair at the lack of momentum toward fulfilling the CPRD convention.

After the government was overthrown last year “a deep silence” engulfed the process, she said.

A government council for the rights of disabled persons that was set up in 2020 has met only a few times.

A national program called “Accessible Country” has been developed but has also not been approved, she complained.

“The issues of disabled persons are not a priority. Without political will from the national leadership, donors cannot achieve anything,” Kazakunova said.

Aigerim Turgunbaeva is a journalist based in Bishkek.