The same volunteer energies are also being used to crowdsource military kit. 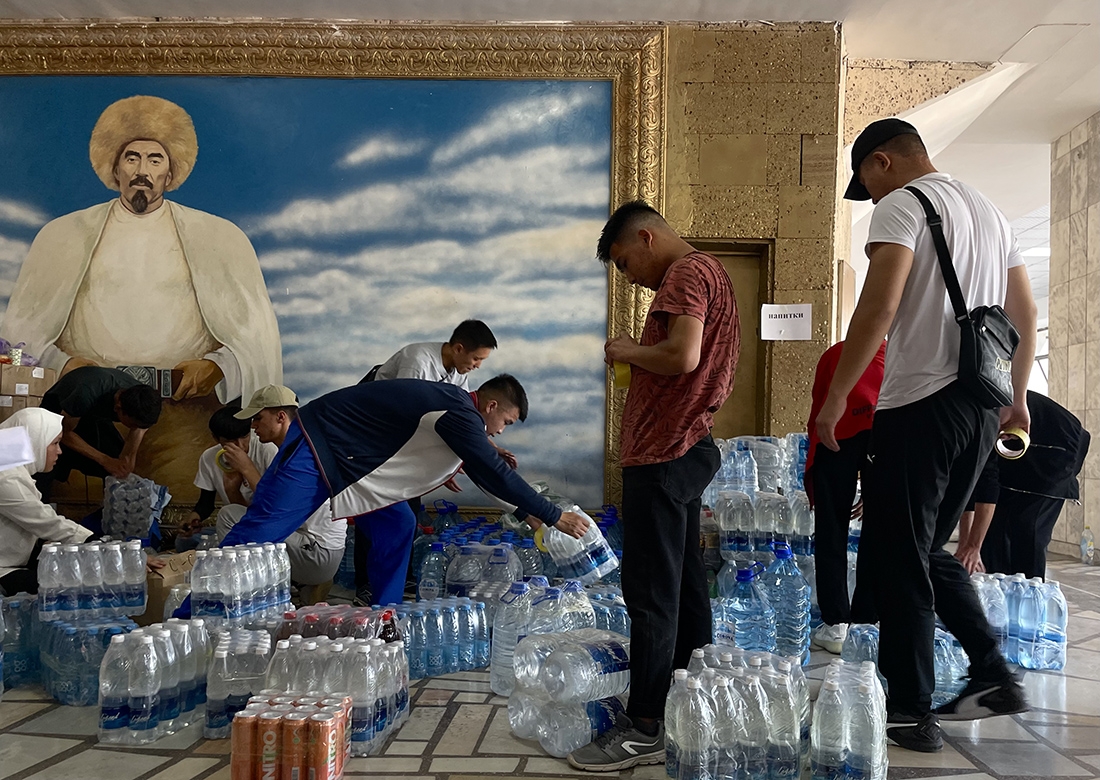 When news broke of the unrest on Kyrgyzstan’s southern border with Tajikistan, there was no question that Gulzat Boronova, a college student in the Kyrgyz capital, Bishkek, would spring into action.

Her parents live in Margun, a village in the Leilek district of the Batken region, where tens of thousands of people have fled their homes since border-straddling settlements started coming under fire last week.

“With my family in that situation, I decided to help somehow,” Boronova, who is in the second year of an architecture degree, told Eurasianet. “I am worried about my family. But my concerns here will not be of any use to them.”

Boronova is part of a large, volunteer army that emerged almost overnight in Bishkek and in other parts of Kyrgyzstan with the goal of easing the humanitarian fallout of the border battles.

The epicenter of the activity in Bishkek has been at the high-ceilinged Sports Palace. Especially on the evening of September 16, when the troubles hit their peak, the concert hall was a frenzy of action. Organizers divided the hundreds of volunteers into sections. Some dealt with the food parcels. Other handled clothing and shoes. Calls went out for the public to also volunteer drugs and female hygiene products, items that can get overlooked in sudden moments of crisis. Bucket brigades snaked out of the Sports Palace toward waiting trucks. At times, volunteers broke into renditions of the Kyrgyz national anthem.

Emergency service officials said over the weekend that almost 137,000 people in the affected Batken region have had to flee their homes. That is around one-quarter of the region’s entire population.

A portion of the internally displaced people were assisted by the Emergency Service Ministry. Most evacuated their towns and villages on their own. Large numbers left by car, but many were on foot.

The first and main challenge for the displaced was to find places to stay. Some had relatives who could take them in, others were offered shelter by strangers. The authorities assisted by commandeering hostels, schools, mosques and cafes. Tents were erected to serve as makeshift shelters.

Households in the village of Boz-Adyr, which is in the Batken region but relatively distant from the Tajik border, offered up places to sleep to thousands of people.

Gulnara Sabirova, 33, traveled from the city of Batken to the home of her mother-in-law in Boz-Adyr.

Almost 100 people have squeezed into their nine-room family house. There is not a single quiet corner left in the building. More than 60 or so children fill the rooms with their cacophony.

“We’re sleeping in all nine rooms, including the kitchen. There are 10-12 people per room. On my way here from Batken, I picked up some people,” Sabirova said. “I never imagined it would come to this, that shells would fall on the city. Unfortunately, the shells got as far as the center [of Batken].

Getting food and clothes to those people has been a major challenge.

Moving things within Kyrgyzstan is not simple, even in peaceful times. For a fully loaded truck to get from Bishkek to Batken would normally take 24 hours.

And still, by September 18, displaced families in rural parts of the Batken region were already getting supplies collected and packed by volunteers in the capital and elsewhere. The Emergency Situations Ministry said 209 tons of humanitarian aid had been delivered, of which 153 had already been distributed to those in need.

The scale of the supply end of the operation is striking. Within days, at least 188 collection points for food, clothes and medicine sprung up around the country. There are big nodes in Bishkek and Osh, the two main cities, but also dozens of smaller ones in the Osh, Issyk-Kul and Talas regions, among others. Even with fresh donations arriving almost every minute, volunteers have coped well with the logistical effort.

Altynbek Kutmanov, one of the people in charge of the aid collection nerve center in Bishkek, said eliminating the human factor has been key to the success of the effort. Everything is being recorded through an electronic cataloging system called Tunduk, he said.

Also, no cash is changing hands. Any monetary donations must be made to special installed payment terminals, Kutmanov said.

This solution is a legacy of the last major border conflagration in the spring of 2021, when around 120 million som ($1.4 million) in cash donations were collected. The intended recipients of that aid later complained that they saw little help coming their way – a detail indicative of the likelihood that the money somehow went astray.

Even those with little goods or money to give have been able to help by donating blood.

The Republic Blood Center in Bishkek has since late last week been besieged by members of the public. At one point on September 17, the line outside the building swelled to almost 400 people, forcing doctors to send hopeful donors away and ask them to return another day.

Esen Osmonov, a 44-year-old resident of Bishkek, was among those to give blood. He told Eurasianet that he is itching to do more on the humanitarian front, but that he is willing to take up arms too, if it comes to that.

“We hope that everything will end peacefully as soon as possible. If that does not happen, there will be mobilization, and we are ready for that,” he said.

The crowdsourcing is not just focused on humanitarian needs.

Local media outlets and bloggers have quickly fallen in line with government positions on the unfolding events. They have focused much of their efforts on creating content in multiple languages to convey to the outside world what they have cast as a premeditated attempt at a land grab by Tajik armed forces. The Tajik government has fiercely rejected this version of events and insists it was Kyrgyzstan that initiated the conflict.

Emir Esentur uulu, a 21-year-old student at the Kyrgyz-Russian Slavic University, arrived at the aid coordination center in Bishkek on the day it opened. First, he worked gathering clothes and food. But since then he has traveled to Almaty, in neighboring Kazakhstan, to buy equipment for his country’s armed forces.

“Last night I went to Almaty to buy drones, thermal cameras and night vision goggles,” he said. “As soon as I learned that our soldiers and civilians were dying, my heart broke. I felt like I was losing my loved ones and relatives. Even though I can’t go there, we are doing our best here so that our guys don’t want for anything.”