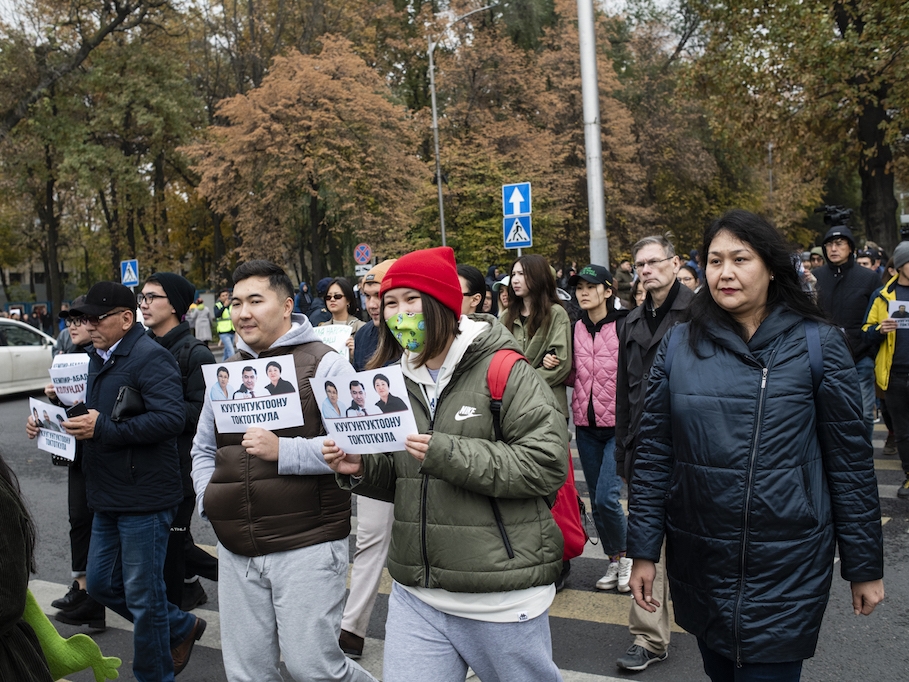 Authorities in Kyrgyzstan are planning to push through legislation that would enable greater government control over the activities of nongovernmental organizations.

While the bill has not yet been submitted to parliament, there have already been widespread howls of protest from civil society and legal experts.

The NGO sector is at present regulated by an oft-amended law adopted in 1999. Critics of the new legislation say it will lead to crippling complications for many organizations and force a number of them to close.

The difficulties start from the moment of registration. At the moment, members of the public can set up an NGO without registering it with the Justice Ministry. With the new proposed law, that will change.

Where foreign nationals and stateless people are now able to set up a civic organization, they may no longer be allowed to do so in future.

Now, an NGO may be set up by any number of people or companies. If the bill is adopted, initiative groups will have to comprise at least 10 people before they can apply for registration. The timeframes for registering NGOs may also increase. While that now takes three days, the government wants to extend the procedure to 30 days, leading some to suspect that more aggressive probes into aspiring NGOs are looming.

The grounds for refusing registration are also broadening. The authorities could in future decline applications if the name of the group is insulting to “moral, ethnic or religious sensibilities.”

If the authorities determine, by their own criteria, that a civic organization is seeking to overthrow the constitutional order or incite hatred and unrest, it is liable to be shut down.

That last point is particularly troubling to the activist community in light of ongoing events in Kyrgyzstan. In October, a disparate group of almost two dozen activists and politicians were arrested on what are widely perceived to be spurious allegations that they were collectively plotting to incite riots with a view to seizing power. Kyrgyz prosecutors are quick to make such accusations and the malleable courts are similarly quick to validate the charges.

The subjective criteria for closing NGOs go even further. One section of the draft bill states that an organization may be shuttered and its employees prosecuted, if its work infringes on the “health and morals of the population.”

Prosecutors and the Justice Ministry could be given more powers to pry into the financial operations of NGOs, up to and including demanding specific information about how groups intend to use their money and property.

Funding is going to become more complicated too. The authorities intend to reserve the right to limit revenue for “certain types” of organizations, although it is not divulge what they mean by that.

If an NGO breaks any laws, is perceived to be violating the terms of its charter, or fails to file reports with the government in due manner, prosecutors and the Justice Ministry will be authorized to use any of those shortcomings as a pretext for liquidating it altogether. No such provisions currently exist.

What has NGOs most concerned is the mooted plan to force them all to re-register under the new dispensation by the end of next year or face closure. Many suspect that this is being set up as a minefield to eliminate unwanted groups.

The government casts its legislative plans as an effort to bring some order into the overgrown and often chaotic thicket of civil society. Officials have said they do not even know how many NGOs are operating in Kyrgyzstan since many are not registered. In their telling, greater control over civil society groups will ensure that they are more transparent. Stricter laws will protect the state from the “illegal” doings of ill-intentioned NGOs, the authors of the draft bill have written.

“There is a need to develop and adopt legislation that… takes into account the interests of the state, ensures public safety, and protects morality, public health, and the ethnic and religious sensitivities of citizens,” they write in a cover note for the bill.

On November 7, a group of 10 representatives from legal and human rights organizations petitioned President Sadyr Japarov to withdraw the bill. Its contents, they said, violate the constitution and a number of international treaties.

Japarov is not likely to be the most receptive audience for such overtures, however. Since he came to power in October 2020 by means of a violent overthrow of the government, he has repeatedly condemned NGOs, including for being “overly politicized” and “posing a risk to [Kyrgyzstan’s] statehood and political security.”

He turned his words into action in July 2021, when he approved changes to the law that required NGO to submit detailed annual financial accounts to the governments. NGOs were already required to provide such information to the authorities, so the amendments merely made the process more unwieldy and complicated. Small organizations with limited human and financial resources have been especially affected.