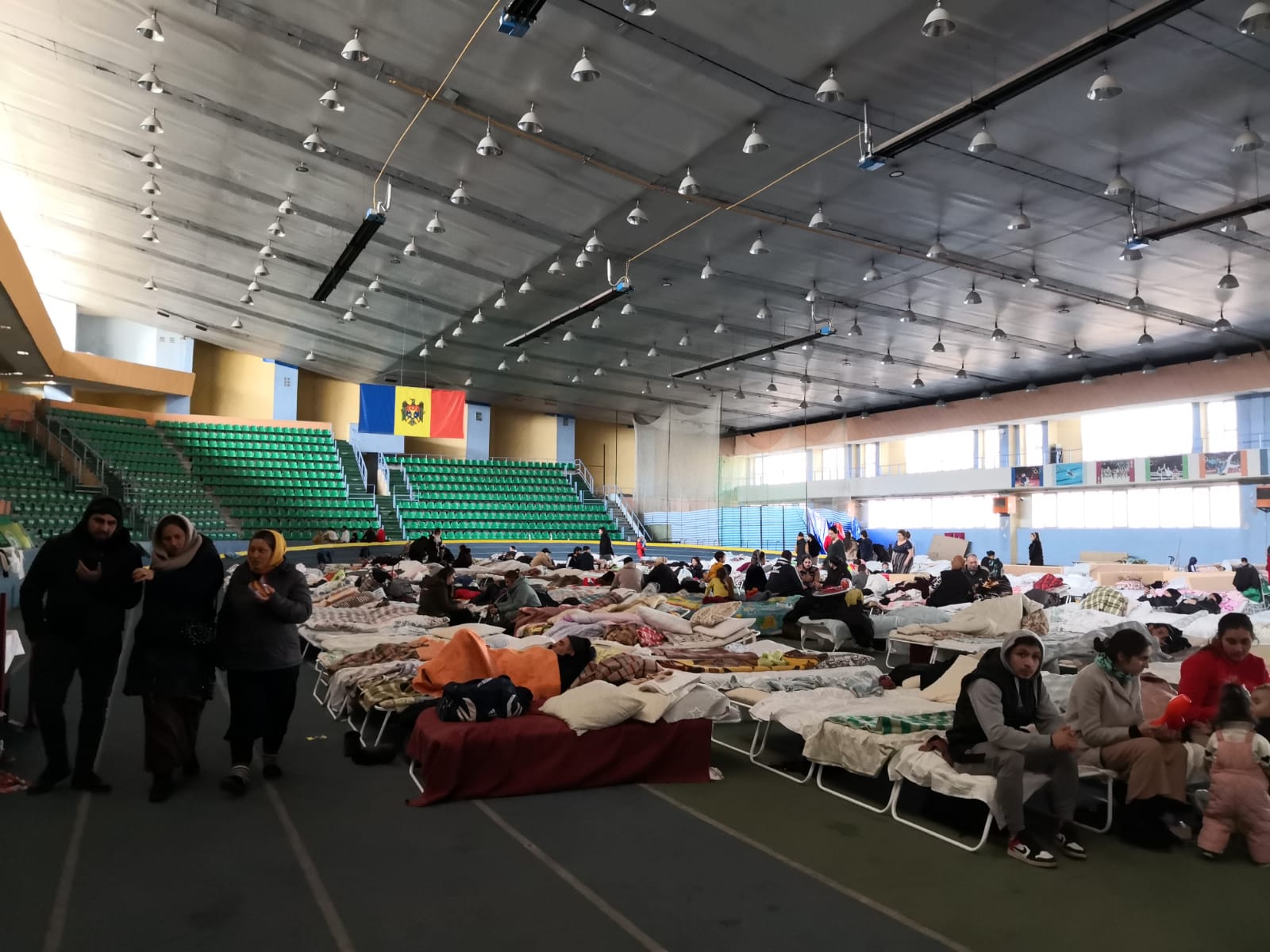 Roma and Azerbaijani refugees from Ukraine

Two weeks into this war, the atmosphere in Moldova seems very calm.  Everything is well organised, shops are fully stocked (although there are mutterings about salt, soap and cereals disappearing) and everyone is going about their normal business.

Petrol prices shot up last week though from 23 – 28 lei overnight.

We got up early and set off for Palanca: the south-eastern border point nearest to Odesa.  We had expected to see convoys of vehicles coming the other way, people walking along the main road, buses bringing people in large numbers to Chişinău. It was quiet.  Snow fell and the wind got up. It was perishing.

The trickle of refugees coming through told us about the Ukrainian side where people wait in their cars for several hours before crossing. Many young families are brought to the border by their menfolk who have to leave them there to cross on foot and then be picked up by the transport the other side.  (Martial law in Ukraine means men aged 18-60 have to stay in Ukraine unless they have three or more children.) There is a building for mothers and babies to wait in on the Ukrainian side and several churches and missionaries take hot food across each day to feed the queues.  The churches have been there since day one.

The south-eastern border at Palanca is well managed, with Moldovan police directing traffic, and a tent camp with washing facilities and toilets, some 3km from the actual border.

As best they can in the open windblown bus station, a warm welcome is provided by state services and a range of charities providing advice and assistance, food and a warm drink, an overnight stay in the campsite or a free bus to Romania, Poland or Chişinău.

Following the first ten days when the volume of people fleeing was huge and there was little organisation, the flow is now manageable.  The number of people who have crossed seems to be measured in used coffee cups and by March 11th, there was a significant drop in numbers.  We believe that currently, about 200 people are crossing the southern borders each day and 500 cross in the north. Most of those crossing the northern points are taken to Ruscani and on to Romania or to Chişinău.  This means the bottleneck is Ungheni – which borders Romania and leads into Iaşi, where lots of additional Wizz Air flights have been scheduled.

Moldova is a tiny country with very limited resources of its own. But it has made an enormous effort in welcoming and helping huge numbers of people coming from Ukraine. There are several centres in the south (mainly reappointed institutions, schools, churches and halls) which have beds, blankets, three basic hot meals a day, hot water and Wifi. Staff and volunteers help with paperwork and onward transport. A large group of Indian students had passed through the one we visited just the day before.

In Chişinău there are now several very big refugee centres that can accommodate up to 1,000 refugees.  They each have distinct personalities:

MoldExpo has private cubicles for each person, with boxes of apples, coffee and water stations dotted around.  Children run up and down the corridors, while women lie on their beds reading or looking at their phones.  In one corner, six little girls were colouring pictures.

On the walls we found plenty of information, from train timetables and taxi numbers to sight-seeing trips, classes and sessions with a psychologist.  Notices were up from different embassies offering help with onward transport to Georgia, Armenia etc for their own nationals. Not everything is free of charge so presumably some of the refugees have money, although definitely not all (and just to make things worse the Ukrainian hryvnia has just devalued).

While we were there, 40 lorries carrying supplies from Germany arrived to reprovision a warehouse nearby with clothes, nappies, hygienic and conserved food products.  These were all neatly stacked in separate cubicles. There are plenty of young Russian-speaking Moldovans volunteering to help in whatever way they can.

The Manej Sports’ Stadium comprises just one vast hall containing row upon row of fold-up beds (Z bed is not the right word to use on this occasion!) and no privacy. There were fewer staff and volunteers here although IsraAID (an Israeli charity that arrived with an army of volunteers on 26th February) had set up a corner in which children can play and do artwork.

The majority of people staying here were Roma and Azerbaijani refugees on the day we visited, while there were mostly ethnic Ukrainian and Armenian refugees being placed in MoldExpo.

According to Diana Covalciuc, from Tony Hawks’ Centre, ¾ of the refugees in Moldova are staying with Moldovan families.  They are comfortable and have company; but in the long term, if they stay, this provision will need to be supported as food, fuel and medical supplies will dwindle and prices rise.

There is no shortage of either NGOs or journalists on the ground.  The big charities are already here and many Moldovan organisations are providing logistical and interpreting support for the journalists and cameramen arriving to visit the border points and centres.  The chaos is over, those with friends or relatives abroad have already moved further afield, those with a less clear picture of what to do next remain here, confused and bewildered. We have heard so many stories of misery and loss as people try to come to terms with the change in their circumstances and for most, the separation from their men and older teenage boys.

In our student hostel, there is a Cat Café, which is full of children and young people eating and chatting while stroking the resident 20 cats.  I was about to go in there yesterday but two girls in front of me hesitated at the door. “Would you like to go through and stroke the cats” I asked. “Yes, we would but we can’t do it.  We left our kittens in Odessa and It’s just too painful” they replied.

So many of them want to go home

Then there is the impact this is going to have on the economy and life in Moldova when/if the dust settles.