The conference on 15 November brought together over 60 representatives of civil society, academia, international organisations, lawyers, consultants and students from Moldova, Ukraine, Russia, Tajikistan, Georgia, Uzbekistan and the UK.

Nicola Ramsden, Chairman of The BEARR Trust, opened the conference by saying that gender-based violence (GBV) is not only an issue of growing concern in BEARR’s region but also a global phenomenon with devastatingly high personal, social and economic costs.

Jessica Gavron, Legal Director of the European Human Rights Advocacy Centre (EHRAC), provided a comprehensive summary of the international legal framework governing GBV-related issues. She particularly highlighted the 1979 Convention on the Elimination of all Forms of Discrimination Against Women (CEDAW) which views GBV as ‘inhumane and degrading treatment’ and contains the ‘due diligence’ principle according to which states have a positive responsibility to prevent GBV. Jessica also talked about barriers to access to justice for GBV victims at the domestic level, such as laws decriminalising domestic violence, gender stereotyping by police, and collusion with perpetrators due to corruption.

Charlie Walker, Associate Professor of Sociology at the University of Southampton and a BEARR Trustee, gave an overview of the main theoretical approaches to masculinity and violence and shared the evidence emerging from his own research on men-focused interventions by civil society in Russia and Ukraine. He pointed out the challenges that men face to conform to traditional approaches to masculinity, such as being the main or only breadwinner in the family. This is particularly difficult for men at the lower end of the labour market, leading to excessively long working hours, low life satisfaction, related health issues, alcoholism and substance abuse – all of which can express themselves in violence against women and girls.

Both Jessica and Charlie agreed that GBV is often seen from the perspective of the victim, where most of the attention devoted to tackling the issue is also traditionally placed, focusing on such things as shelters, psychological support and healthcare interventions. Instead, Jessica pointed out that GBV is a consequence of deep structural inequalities in society and power imbalances in the family and in partners’ relationships. Likewise, Charlie stated that, while the causes of GBV may sometimes appear cultural, they often in fact relate to market failure in low-wage economies and inadequate welfare structures which reinforce gender inequalities and lead to ‘toxic’ interpretations of masculinity.

In the second session, Marina Pisklakova-Parker, Director of the Centre for the Prevention of Violence and Crisis (ANNA) in Moscow and Oxana Alistratova, Director of Interaction NGO in Tiraspol, Moldova, focused on coercion, exploitation and GBV in Russia and Moldova respectively. Marina highlighted the lack of reliable data on GBV due to widespread underreporting by victims globally. This has become particularly acute in Russia since 2017 when the number of cases reported to the police has halved to 25,000 (from 50,000 in 2016) due to the decriminalisation of domestic violence. Marina also pointed to some glimmers of hope: alongside few high-profile domestic violence cases that captured the nation’s attention via social media, some progress has been made in 2019 on drafting of new legislation which will potentially go back to classifying domestic violence as a crime. Oxana talked about the strong correlation between human trafficking and domestic violence in Transnistria, especially for the most vulnerable women and girls such as those in institutional care. Oxana described vividly the legal and financial challenges her organisation faces operating in an unrecognised territory (Transnistria) as well as some encouraging achievements, such as a successful public campaign against domestic violence. Marina contributed some analysis of the situation in Belarus on behalf of Irina Alkhovka (Gender Perspectives NGO, Belarus), observing that the situation there was similar to that in Russia.

During a roundtable discussion with the focus on Central Asia, Subhiya Mastonshoeva, an independent research consultant from Tajikistan, highlighted (via video link) the issue of ‘intersectionality’, namely that the most vulnerable victims of domestic violence are those who also face additional challenges, such as disability, poverty, belonging to an ethnic minority, old age, etc. According to Subhiya, the greatest impact in tackling GBV can be achieved through a combination of economic empowerment, education, skills development and changes in gender norms. Tahmina Rees, a civil society activist from Tajikistan based in London, pointed to the shortcomings of Tajikistan’s law on domestic violence and the inadequate state funding allocated to combatting GBV. Colette Harris, Reader in Gender and Development at the School of Oriental and African Studies in London, argued that GBV is being addressed to some extent in Central Asian cities and towns but not in rural areas, which are experiencing a resurgence of traditional cultural norms related to Islam. Dilmurad Yusupov, a PhD student from Uzbekistan at the University of Sussex, pointed to one encouraging phenomenon in Central Asia: women leaders taking a more active role in municipal governance by participating in mahalas, a phenomenon mainly driven by the large-scale migration of men to work abroad. The roundtable participants agreed that harmful cultural practices, such as honour killing, bride kidnapping and early marriage, are a real concern, but that culture is not static and interpretations of cultural norms do change over time.

The final session focused on the protection and prevention of violence against women and girls by state and civil society organisations. Elmar Khalilov, Ambassador for Women against Violence Europe (WAVE) in Georgia and a founder of the Anti-Violence Network of Georgia NGO (AVNG), talked the audience through a moving set of photographs on child marriage, which is especially prevalent among ethnic minorities in Georgia. Although laws exist against early marriage, marriages are often registered unofficially and frequently caused by financial difficulties in the family. Elmar argued that education is the key, and that efforts need to be focused on keeping young women from ethnic minority communities in school as long as possible. Halyna Skipalska, Executive Director of the Ukrainian Foundation for Public Health (Healthright), said that the armed conflict in eastern Ukraine has had negative impacts on GBV due to a deterioration in the economy and family well-being and large migration flows. In 2017, Ukraine reformed the law to criminalise domestic violence and adopted the relevant bylaws to implement it in accordance with international standards. While originally donor-driven, anti-GBV activities related to identification, access to shelters, day service centres and support, are now partially funded by the government, which is much more sustainable in the long run.

Nicola Ramsden concluded that violence against women and girls is exacerbated by a complex interplay between structural causes at the macroeconomic level, re-traditionalisation of cultural norms, and weak state responses in Eastern Europe and Central Asia. She added that effective responses need to include a wide range of measures such as access to skills and education, reducing corruption, training of police and funding social work. At the end, Nicola echoed a poignant theme of the event: GBV is a cross-border and cross-cultural issue that can be effectively addressed by civil society, which ‘knowns no borders’, in close cooperation with academia, international organisations and governments.

BEARR is grateful to Janet Gunn and Sophie Vandyck, principal organisers of the conference, and to the many volunteers who helped make the event so effective and enjoyable. 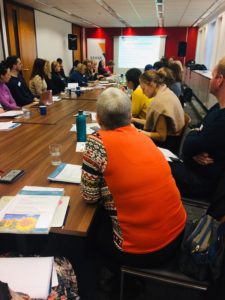 Here are the speakers’ presentations (not for re-use without the author’s permission – for permission please contact info@bearr.org):