Armenia – struggling to ratify convention on violence against women

Armenia – struggling to ratify convention on violence against women

Armenian government fighting for ratification of convention on violence against women

The Armenian church made a rare intervention in politics to publicly oppose the convention, and the government has appealed to European officials for guidance. 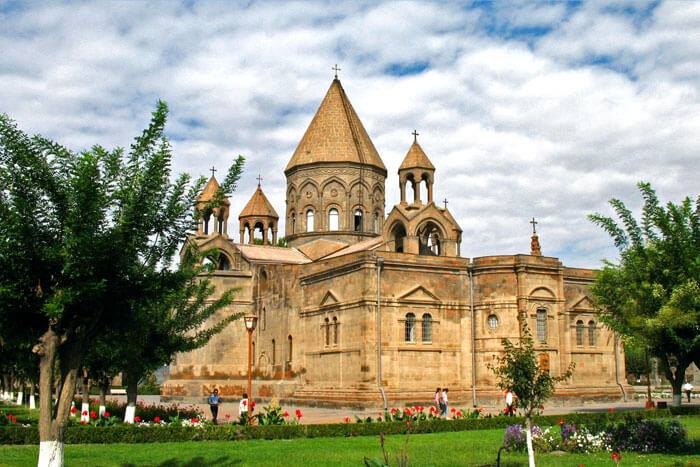 Etchmiadzin, the seat of the Armenian Apostolic Church. Church officials recently made a rare political intervention to oppose Armenia’s ratification of a convention to prevent violence against women. (photo: Facebook, Mother See of Holy Etchmiadzin)

The Armenian government’s efforts to ratify an international convention to prevent violence against women are running up against opposition from conservatives in the country, including the influential church.

At issue is the Istanbul Convention, a Council of Europe document that requires signatories to implement specific measures to protect women from violence. It also contains provisions forbidding discrimination on the basis of sexual orientation and specifies that gender is a social construct rather than a biological fact.

Armenia signed the convention in January 2018, under the previous government, but has yet to ratify it. The new authorities, however, have declared their intention to finalize that process. On May 8, Minister of Labor and Social Affairs Zaruhi Batoyan, in a meeting with a Council of Europe official, said that Armenia intended to ratify the convention, and eight days later the parliament passed a five-year government action plan that formally announced that intention.

That launched a nationwide debate on the convention, with many conservative voices complaining that attempts to regulate domestic violence represent an imposition of foreign values on Armenia’s traditional family model. The debate was heightened by a #metoo-style movement in which Armenian women for the first time in large numbers shared their experiences with sexual violence. Some conservatives claimed that the movement was a smokescreen aimed at easing the way for ratification of the Istanbul Convention.

On July 26, those voiced were joined by the Armenian Apostolic Church, which rarely wades into political matters but made an exception to criticize the convention. “Irrespective of the biological differences created by God, all people enjoy the same care of God,” the church leadership said in a statement. The church also claimed that the convention “defines a third sex apart from female and male,” which it does not do. “There are extremely concerning points in the Convention from the perspective of our national-spiritual identity and security, we urge our authorities to refrain from ratifying the document,” it concluded.

The Ministry of Justice subsequently issued a lengthy statement explaining its position and complained about “manipulative” information about the convention put forth by opponents.

The ministry also announced that it had sought guidance from the Venice Commission, a Council of Europe body that advises on legal and constitutional issues, on the “constitutional implications” of the ratification of the convention. Assuming that the Venice Commission rules favorably, ratification appears inevitable given the fact that the overwhelming majority of members of parliament from the ruling “My Step” coalition support it.

Among the opponents of ratifying the Istanbul Convention are members of the Republican Party, under whose rule the document was signed. Eduard Sharmazanov, a Republican spokesman, announced on Facebook that he had signed a petition against the convention, writing: “No to perversion.”

The petition was created by the chairman of Armenia’s Chamber of Advocates, Ara Zohrabyan, but it was later taken down by the host, change.org, because it was considered to have included hate speech.

Ani Mejlumyan is a reporter based in Yerevan.
https://eurasianet.org/armenian-government-fighting-for-ratification-of-convention-on-violence-against-women