What happens when a maternity hospital is bombed

Home / Regional News / What happens when a maternity hospital is bombed

What happens when a maternity hospital is bombed 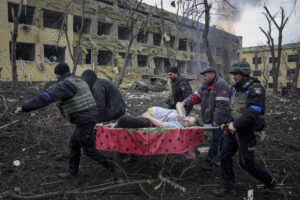 MARIUPOL, Ukraine (AP) — A wounded pregnant woman who was taken on a stretcher from a maternity hospital that was bombed by Russia last week has died, along with her baby, The Associated Press has learned.

Images of the woman, whom the AP has not been able to identify, were seen around the world, personifying the horror of an attack on civilians.

She was one of at least three pregnant women tracked down by AP from the maternity hospital that was bombarded Wednesday in the Ukrainian city of Mariupol. The other two survived, along with their newborn daughters. 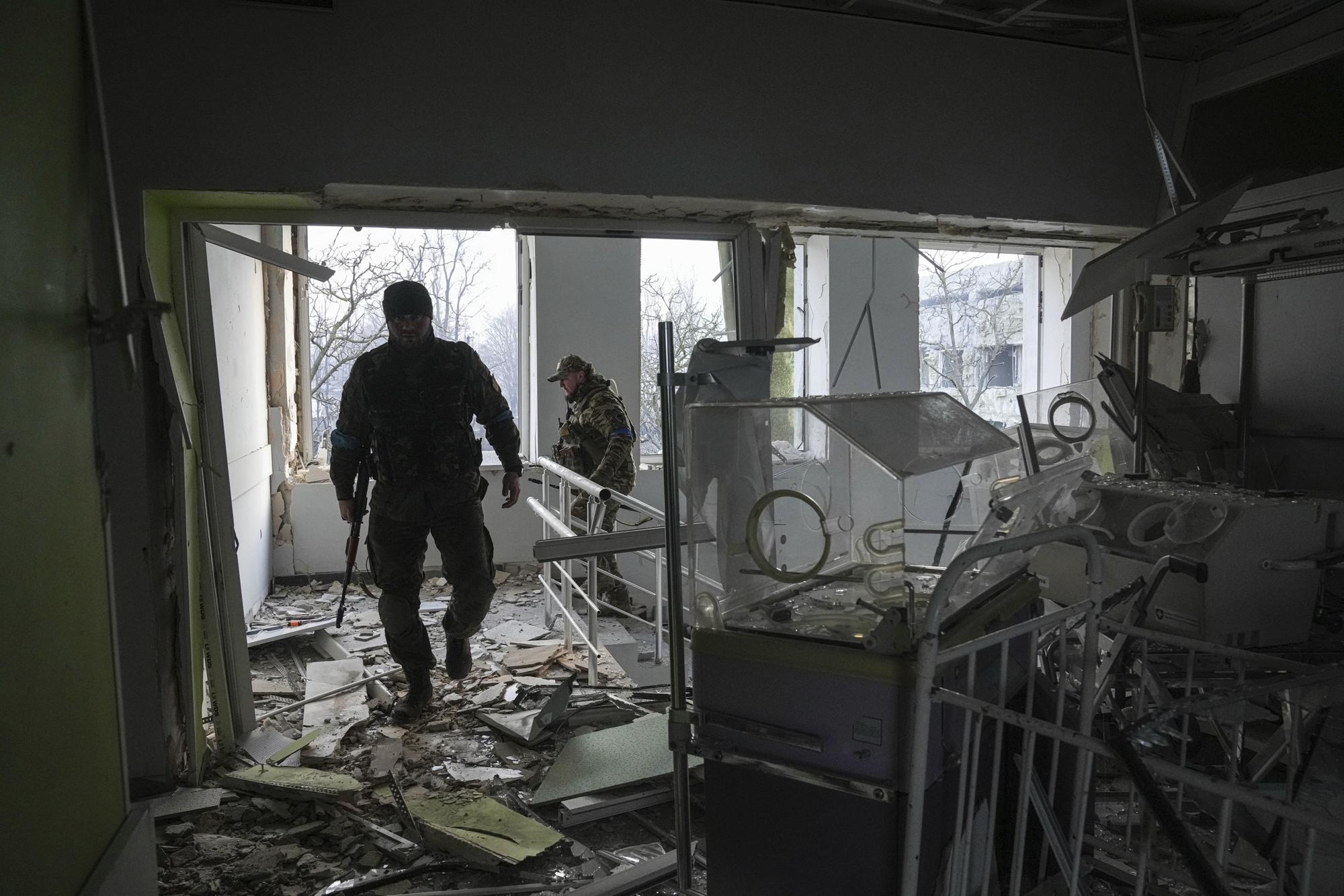 Ukrainian servicemen work inside of a maternity hospital that was damaged by shelling in Mariupol, Ukraine, March 9, 2022. (AP Photo/Evgeniy Maloletka)

In video and photos shot by AP journalists after the hospital attack, the wounded woman stroked her bloodied lower left abdomen as emergency workers carried her through the rubble, her blanched face mirroring her shock at what had just happened.

It was among the most brutal moments so far in Russia’s now 19-day-old war in Ukraine.

The woman was taken to another hospital, closer to the front line, where doctors tried to save her. Realizing she was losing her baby, medics said, she had cried out to them, “Kill me now!”

Dr. Timur Marin said Saturday that the woman’s pelvis had been crushed and her hip detached. Her baby was delivered via cesarean section but showed “no signs of life,” he said.

They tried to save the woman, and “more than 30 minutes of resuscitation of the mother didn’t produce results,” Marin said. “Both died.”

In the chaos after the airstrike, medical workers did not get her name before her husband and father took away her body. Doctors said they were grateful that she didn’t end up in the mass graves being dug for many of Mariupol’s dead. 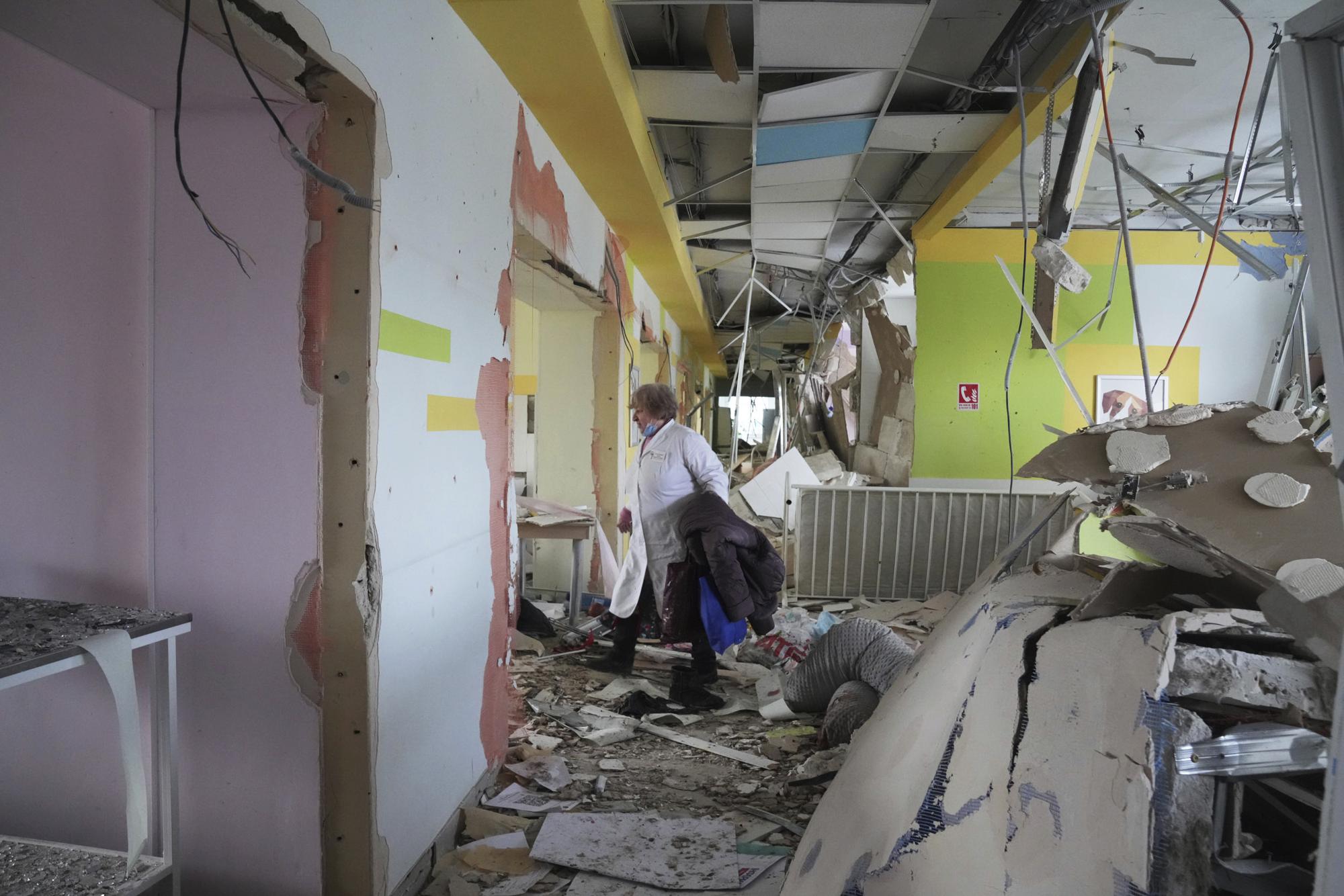 A medical worker walks through the hall of a maternity hospital damaged in a shelling attack in Mariupol, Ukraine, Wednesday, March 9, 2022. (AP Photo/Evgeniy Maloletka)

Accused of attacking civilians, Russian officials claimed the maternity hospital had been taken over by Ukrainian extremists to use as a base, and that no patients or medics were left inside. Russia’s ambassador to the U.N. and the Russian Embassy in London falsely described the AP images as fakes.

Associated Press journalists, who have been reporting from inside blockaded Mariupol since early in the war, documented the attack and saw the victims and damage firsthand.They shot video and photos of several bloodstained, pregnant mothers fleeing the blown-out maternity ward as medical workers shouted and children cried.

The AP team tracked down some of the victims Friday and Saturday after they were transferred to another hospital on the outskirts of Mariupol. The port city on the Sea of Azov has been without supplies of food, water, power or heat for more than a week. Electricity from emergency generators is reserved for operating rooms.

As survivors described their ordeal, explosions shook the walls, causing medical workers to flinch. Shelling and shooting in the area is sporadic but relentless. Emotions ran high, even as doctors and nurses focused on their work. 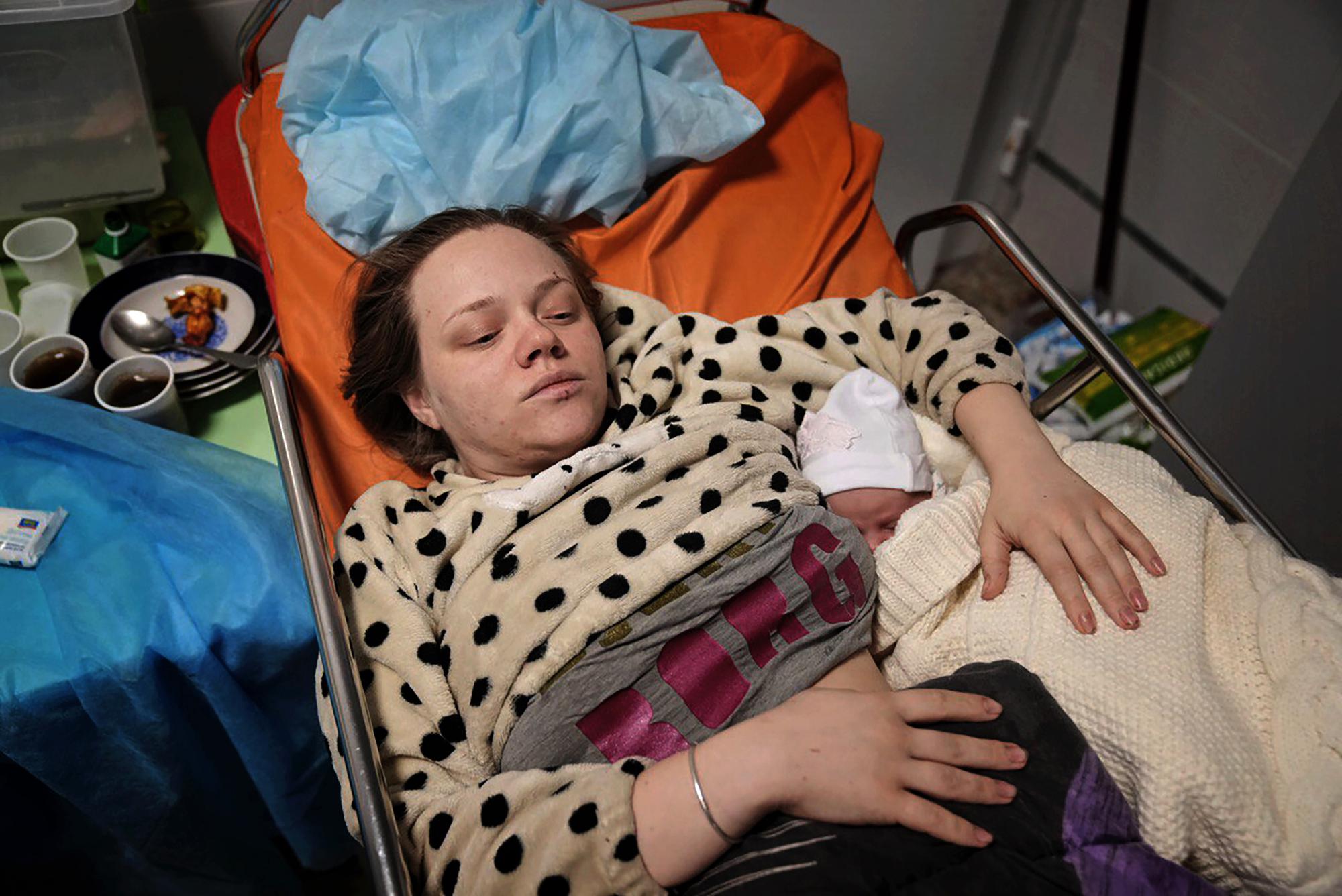 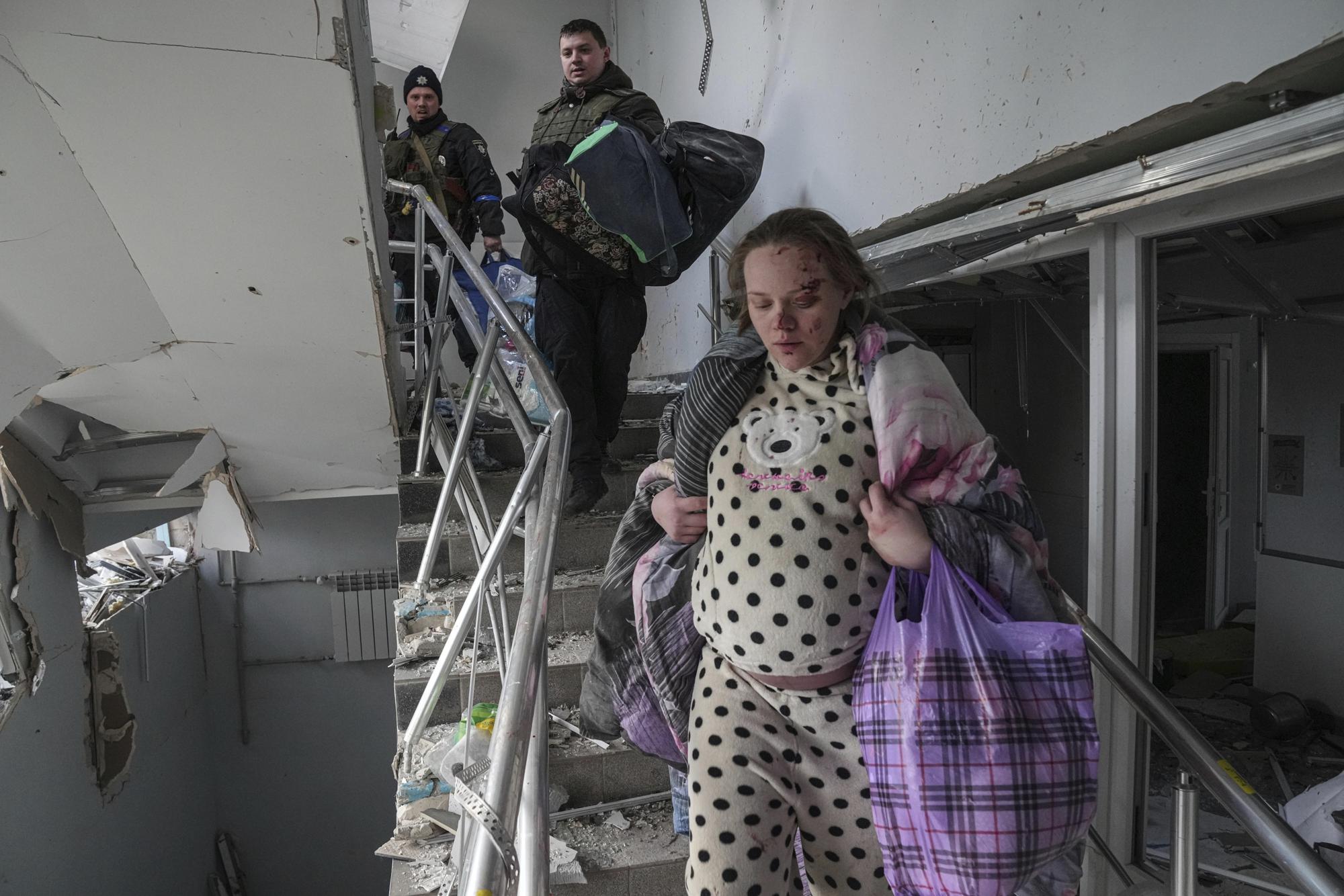 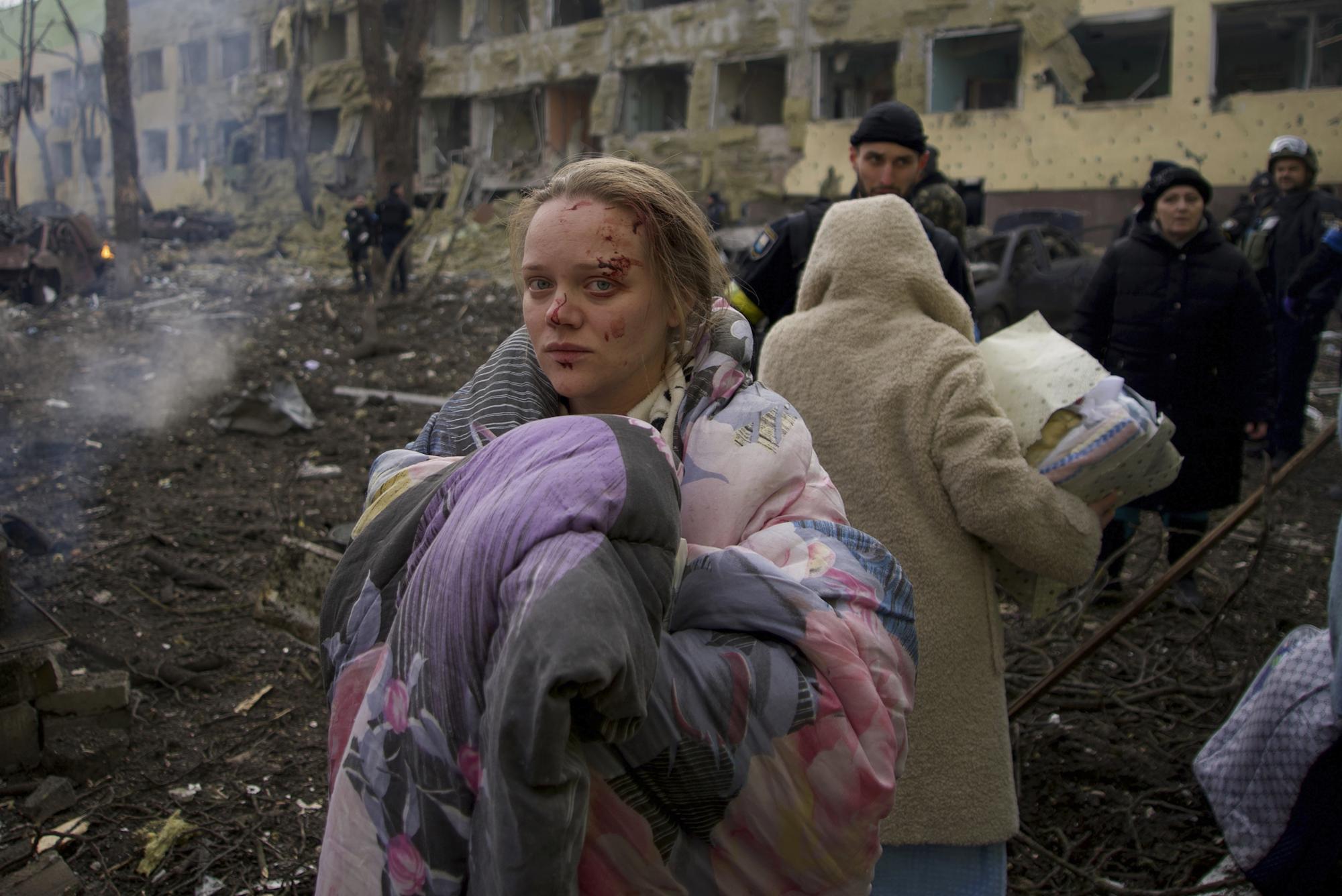 Mariana Vishegirskaya stands outside a maternity hospital that was damaged by shelling in Mariupol, Ukraine, March 9, 2022. (AP Photo/Mstyslav Chernov)

Another pregnant woman, Mariana Vishegirskaya, gave birth to a girl on Thursday. She recounted the bombing to the AP as she wrapped her arm around her newborn daughter, Veronika.

After AP photos and video showed her navigating down debris-strewn stairs in her polka-dot pajamas while clutching a blanket, Russian officials falsely claimed she was an actor in a staged attack.

“It happened on March 9 in Hospital No. 3 in Mariupol. We were lying in wards when glass, frames, windows and walls flew apart,” said Vishegirskaya, who has blogged on social media about fashion and beauty.

“We don’t know how it happened. We were in our wards and some had time to cover themselves, some didn’t,” she said. 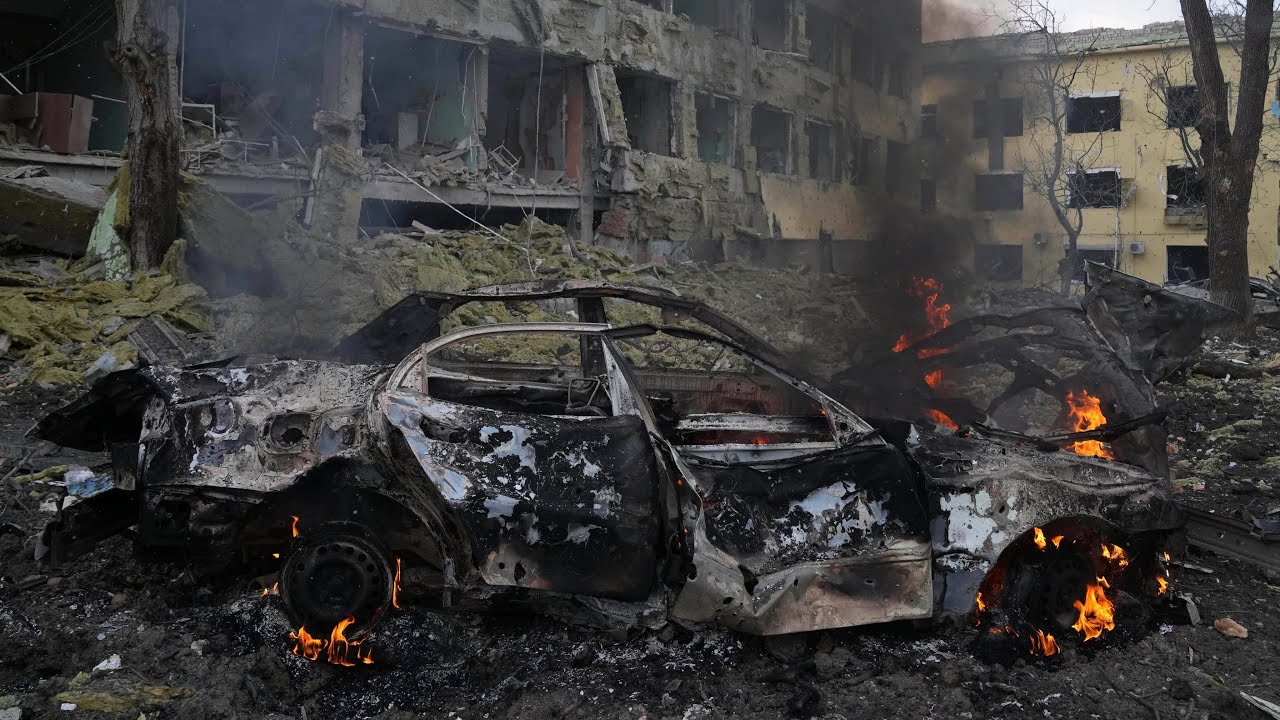 Her ordeal was one among many in the city of 430,000 people, which has become a symbol of resistance to Russian President Vladimir Putin’s war in Ukraine.

The failure to fully capture Mariupol has pushed Russian forces to broaden their offensive elsewhere in Ukraine. The city is a key to creating a land bridge from the Russian border to the Crimean Peninsula, which Moscow annexed from Ukraine in 2014.

“All birthing mothers have lived through so much,” said nurse Olga Vereshagina. 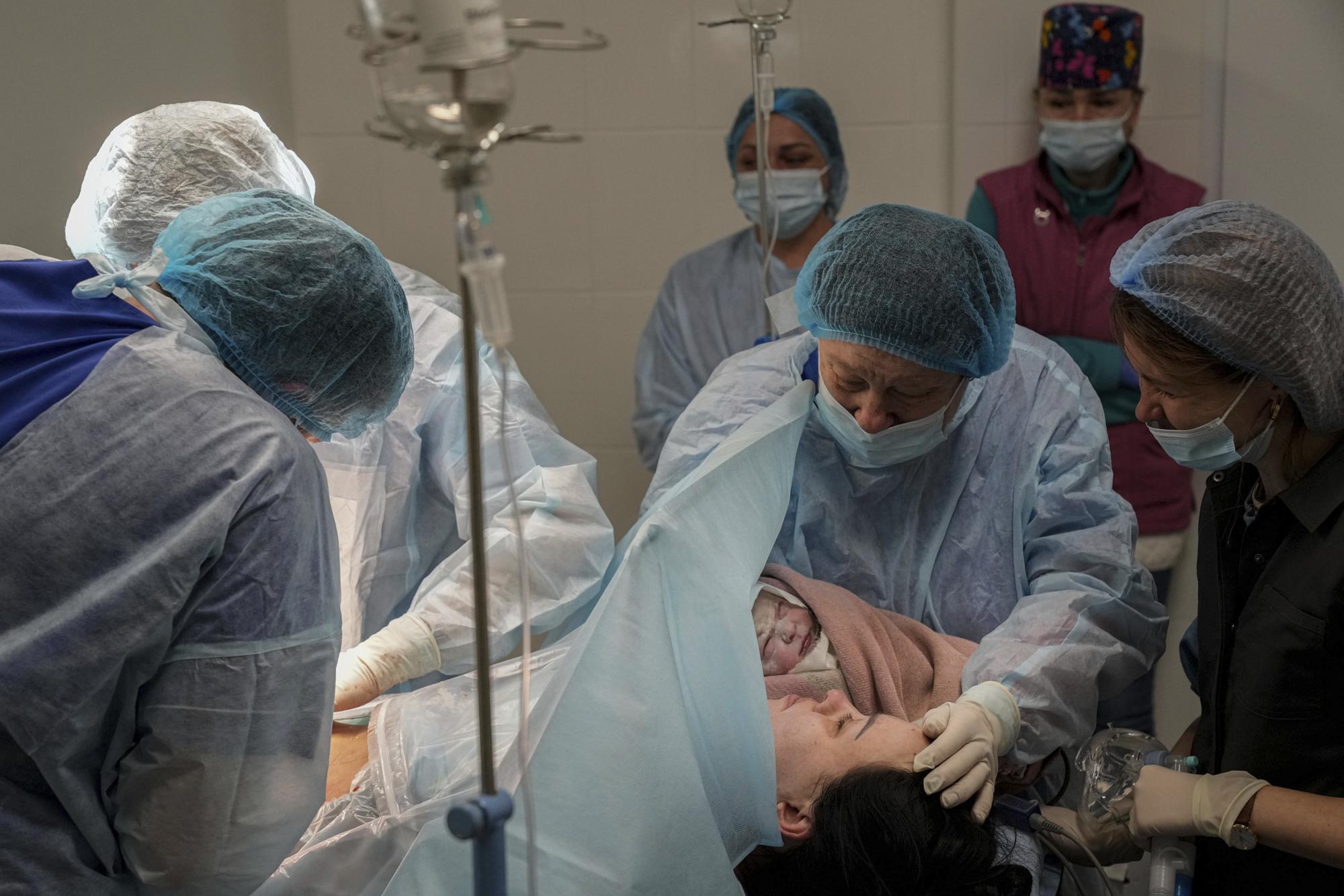 Medical workers hold newborn Alana close to her mother after a cesarean section at a hospital in Mariupol, Ukraine, March 11, 2022. (AP Photo/Evgeniy Maloletka)

A third pregnant woman seen by AP lost some of her toes in the bombing, and medical workers performed a cesarean section on her Friday.

Her baby was rubbed vigorously to stimulate any signs of life. After a few tense moments, the baby began to wail.

Cheers resonated through the room amid the cries of the girl, who was named Alana. Her mother also cried and the medical staff wiped tears from their own eyes. 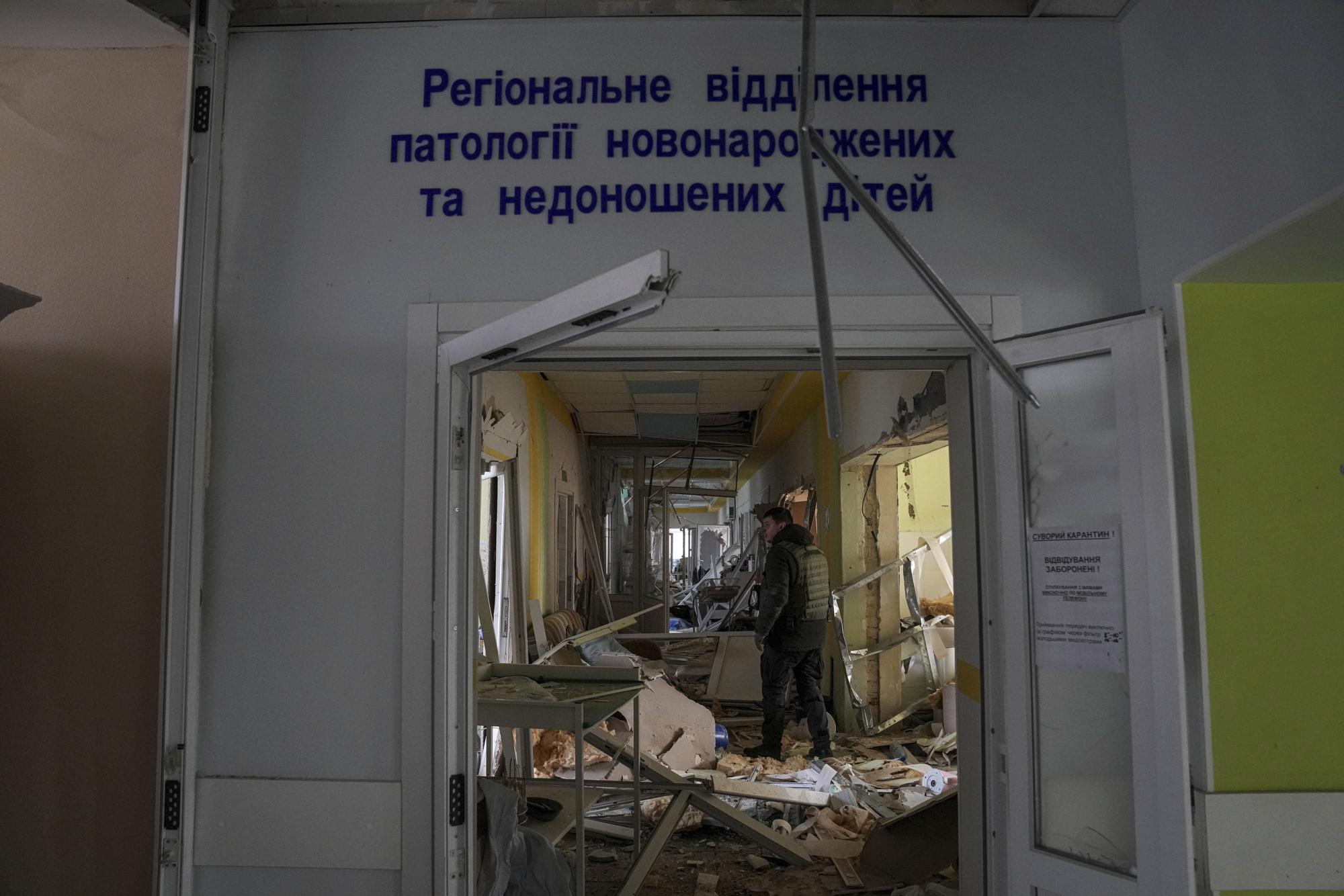