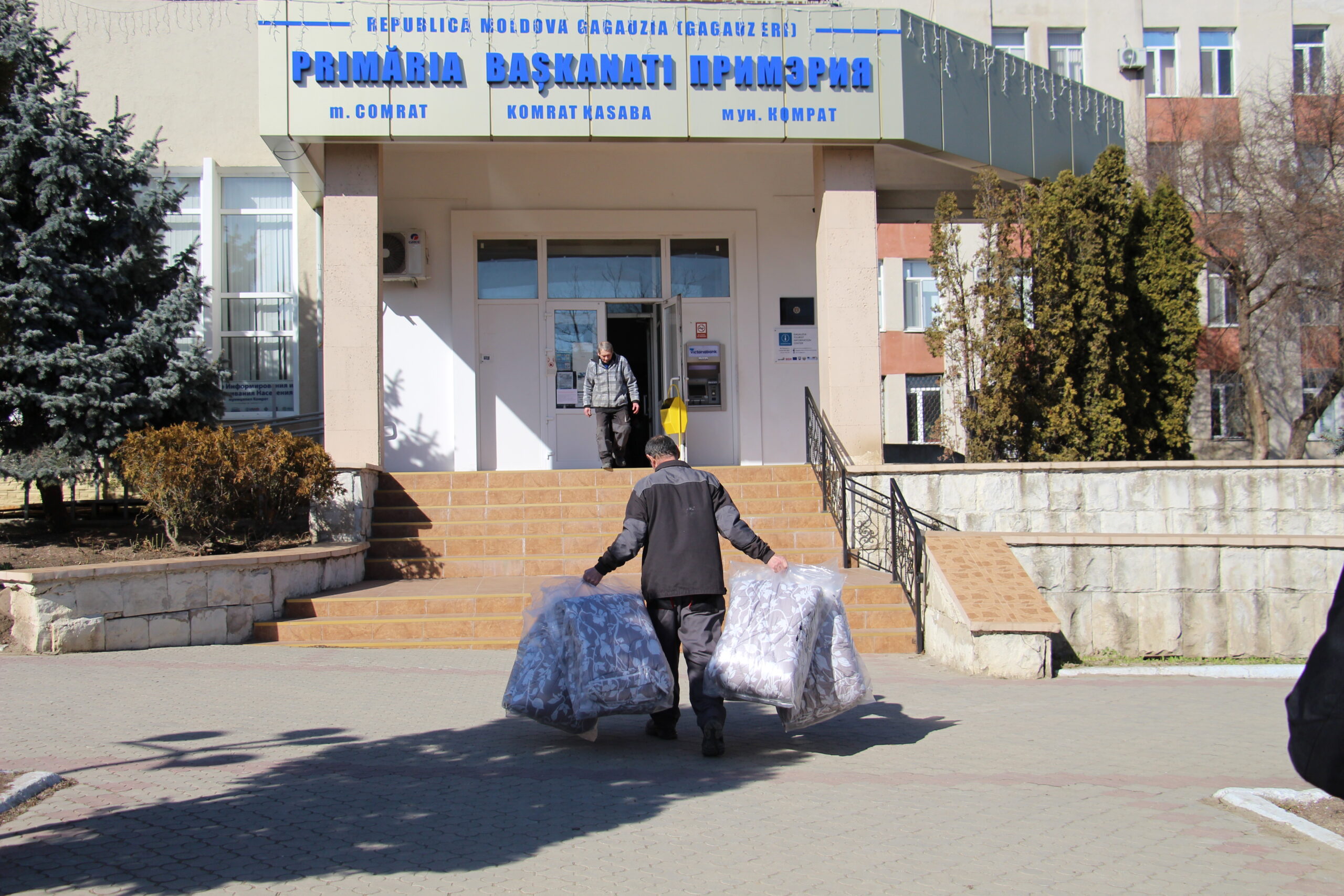 Over the past week, BEARR support for refugees in Moldova has continued. Needs are great in Chisinau and even greater in the regions. Food is now in short supply, and getting more expensive, while international assistance is not reaching refugees under the jurisdiction of the municipalities, who do not have the funds to help them.

Megan and a CSO took two minibus loads of supplies to Comrat. She helped to buy bedding for refugees. The partner CSO, Institute for Democracy, and the mayor of Comrat were very grateful, and a video of the delivery was filmed, see link in the latest appeal update.  The Institute’s president, Andrei Borsevski fesatures in it.

BEARR also paid for the petrol for a Moldovan volunteer from Dobrie voditeli Moldova (Good Drivers of Moldova) arranged over social media for a mother and daughter and a student from Kyiv when their neighbouring block was shelled. They had managed to get to a sports club in Vinnytsia where they were allowed to stay up to five days, sleeping on yoga mats and then had to move on, with no money to do so.

Megan also bought and delivered fridges and a television for refugee accommodation in a school in a small town with a refugee shelter in southern Moldova, for them to store fresh food and have something to distract them. The school is housing refugees of various ethnicities from Ukraine, including from Azeraijan and Armenia, and they seem to be getting along fine together. Megan says : “This centre is feeding 57 people who live there and another eleven who are staying with families in the village who can no longer afford to feed them. To date the centre has received 5,000 lei (£200) from the authorities and nothing more. As the first month of their operations comes to an end on 28th March they are waiting with some trepidation to see if the Department of Social Security will pay not only the heating bill but also the wages of the manager and other staff. They have had cooks from the Gagauzia Centre as during Lent there are no weddings or similar events, but that will change after Easter.

One of the most valuable results of having had Megan and Jane on the ground is that they have discovered other CSOs doing really useful work, taking emergency supplies to refugees in the villages and around Moldova, and they have also been able to help with requests from contacts in the UK, such as linking up with evacuees from a children’s home in northern Ukraine, who moved to western Ukraine without more than what was on their backs. BEARR provided funds to buy clothes and shoes for them.

Megan and Jane in Moldova: Blogpost 4 – 10 days and counting…

The frenetic tempo of our first week has now slowed down and we are having longer, more  reflective visits to our previous partners, helping them to add refugee work to their pre-war work and looking to the future.  Our Moldovan partners are doing some remarkable things – hosting refugees in their own homes while trying to continue with their day jobs!  We are also building new relationships with organisations that are contributing to the relief effort here.  Often they are based outside the capital and so support doesn’t always reach them.

From what we have observed, aid distribution points in Chisinau seem to be working smoothly with regular deliveries of food and a good stock of blankets. Food arriving at the central municipal refugee centre at MoldExpo is repacked into smaller boxes and distributed.  Much of the clothing available is not suitable for the current cold weather but it will not be wasted. Inevitably some items are in high demand and resupply doesn’t always keep up.  Having cash here we can help fill some of these gaps. Mostly the need is for baby formula, nappies and food for women approaching full term of pregnancy: tins of fish and meat as well as cereals and grains.  Our money can also help to buy urgent medication that families cannot afford, as well as, occasionally, transport for families with babies and/or with a disability, where a public bus is not practicable.

Towns in Moldova further from the capital are much less well-off, and have few CSOs operating in them, yet they still have to house refugees, some of whom stay, while others move on. They don’t get government funding to host the refugee families.

In the past week we have linked up with JCI (Junior Chamber International) who are very active in Moldova and Ukraine.  Through them, we have been able to support an orphanage that has been on the move from Kharkiv to the west of Ukraine: 198 children have been in dire need of shoes and clothes because they fled in a hurry and didn’t bring anything with them.  Serendipitously, the JCI representative from Kharkiv happened to be in Uzhgorod (in Ukrainian Transcarpathia)with his family and he helped us check out the orphanage and responsible adults and provided a conduit for the funding.  We are hugely thankful to him, for his spontaneous and effective help.

In the same way we have managed to support JCI in Ungheni in Moldova, which will purchase 80 school rucksacks and sets of materials for Ukrainian children just enrolled into 2 local schools.  We have requested that any Moldovan children with a similar need are similarly supported.

Last night we joined the Polish League of Women and their Playback Theatre – a way of helping people cope with trauma. Tonight, with BEARR funding, they are trialling an anti-burnout workshop with some volunteers who have been helping refugees. Listening to the stories of some of the women passing through Moldova who came out of Mykolayiv, Kharkiv and Chernihiv has been hard but we hope that when they are ready, this type of workshop and therapy might prove beneficial.

We met up with Hope and Health CSO, who received a BEARR grant in 2009 to train young people with learning disabilities to cook. For some time now they have been cooking hot lunches and taking them to housebound elderly people in the area. There are possibilities to extend this to feed refugees as their centre has been ordered to take in 40.  To date this has not yet happened as H&H doesn’t have the money to pay for the heating, the authorities haven’t offered to cover the cost and it is still too cold to sleep there without it. These are just some examples of organisations that slip through the municipal and governmental budget nets, but they continue to operate by themselves.

While our main focus is getting emergency aid to those who need it most we can’t ignore the needs of those delivering this aid directly – volunteers working day in day out, under huge strain. We also need to think about the fact that while Moldova is largely a transit route for refugees, those who have chosen to stay need rapid integration to normalise lives of their children, hence the school packs. And some say that emergency food matters most…..

Jane flew back to UK on Saturday afternoon, from Iasi in Romania (Chisinau airport is closed for regular flights and only available for cargo and daily flights to Tel Aviv).

Megan will continue in Moldova with her aid distribution and supporting BEARR’s former grantees in their relief work with refugees and those in need locally.